by Wayne Harrison
Set Up: See Diagram (a) below. Thie activity begins as a 4 v 4 game working on zonal marking (marking space). Use a rope (red lines in diagram) to tie the players together so they have to move as a unit and so they “feel it”. It can be a back four or a midfield four – the responsibilities are the same. Four 5-yard wide goals are created with cones for each team to defend as shown. Teams can score in any goal at any time. Each team must work in a unit of four (or a three with three goals to defend). Each goal is zoned off for a player to fill. 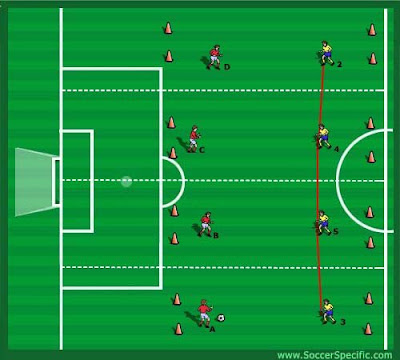 Explanation: To maintain a shape players defend their own goals but must support their team-mates to regain possession. By focusing on a goal of their own to defend it helps them keep a sense of shape as a unit. They have to think about defending their goal, keeping their zone, supporting the pressing player and marking their own player who is in their zone. Players must try to maintain their shape and not be moved around by the opposition as they would if they were man-marking players not space. Players must squeeze centrally behind the ball. To establish where zones begin and end, place cones down to represent boundaries.
Note – Players take their shape from 4 references, the rope, the zone the goal the opposing players.
In Diagram (b) below the players are illustrated “sliding” to squeeze the player on the ball as well as offer defensive balance and support. 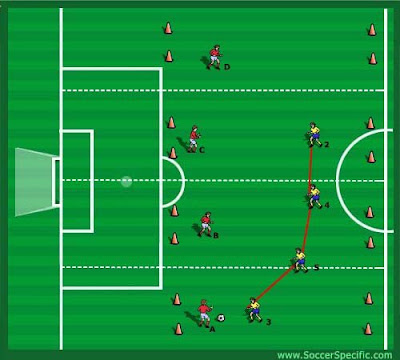 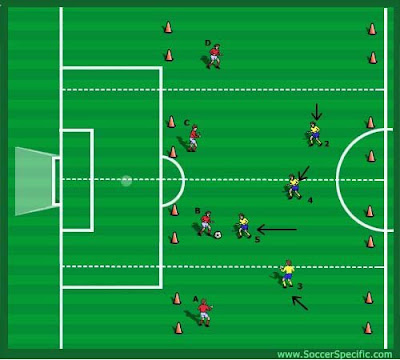 As the ball moves each player adjusts to become the pressing player (if it´s to their immediate opponent) or a support player who judges position from how close they are to the ball. The closer to the ball the more they mark the player the further from the ball the more they mark space. As above (5) is closest, (3) and (4) are next closest and (2) is the furthest away but still close enough to close down as the ball travels. Introduce offside to make it more realistic.
Progression: Introduce two more players per team (see Diagram (d) below), each team can represent a back four plus two central strikers or a midfield four and two strikers. Again looking to maintain a team zonal marking shape. (7) can “double up”. As (E) and (F) move across the back four they are “passed-on” as they enter a new zone if there is someone to pass on to. The rope theory can be applied again here where they move in unison (2 midfield players also). 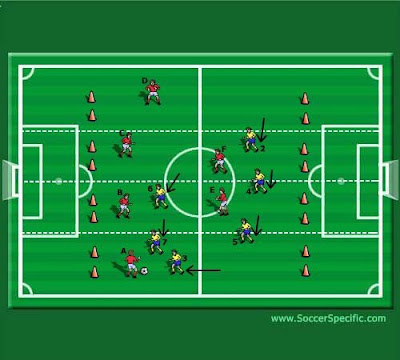 Progression: Introduce two wide players to each team so it’s a four and four as shown below. Attacking team try to move players around, defending team try to hold their zonal shape but also win back the ball.
Now we have two 4 v 4 ˜s with no free players. Still trying to maintain a shape marking zones (spaces) but being aware of the immediate opponents position. 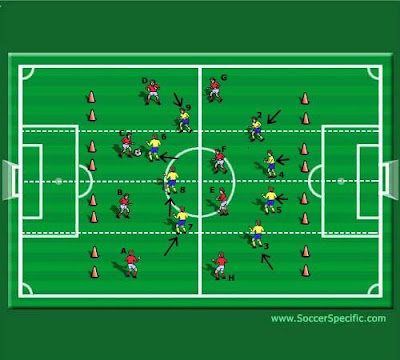 See above – (6) closes down the immediate opponent on the ball, (7), (8) and (9) close up around the ball but still aware of immediate opponents position.
Progression: To establish where zones begin and end, place cones down to represent boundaries. Each player knows where their responsibility lies in terms of zonal defending. They mark players who enter their zone. At times it is possible to mark “in advance” of the ball – marking in advance of the ball means for example (2) is marking in advance of (E) as illustrated below. 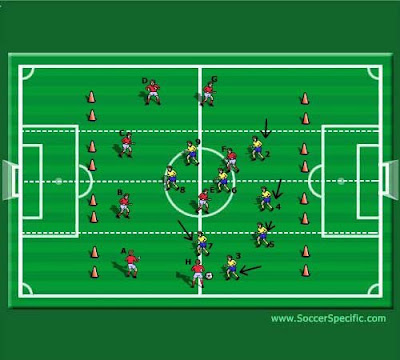 If the ball is passed to (G) from (H), (2) can try to intercept the pass or if not able to, at least stop (E) from advancing by closing down as the ball travels. (2) is still in a good position to defend being between the ball the opponent and the goal (inside the guiding triangle). Likewise (4) off (F) and (5) off (E). Eventually work a 4 v 8.
Wayne Harrison has a wealth of knowledge at the highest levels of the game both as a player and coach. He specialises in designinging training sessions that develop game awareness and quick thinking. A former Academy Director at Blackpool F.C. in the English 2nd Division, he now writes and presents at coaching symposiums worldwide. Harrison holds the prestigious UEFA ˜A’ License as well as a bachelors degree in applied physiology and sports psychology.