by Tom Turner
Good Coaching
Good coaching is about creating an environment where players can improve and enjoy playing soccer. The first challenge is to create practice activities that naturally transfer learning from training to games. At the younger ages, this is THE most important element of coaching as the majority of young players (~U10 and below) are not developmentally ready for deliberate instruction. Once the coach is able to create good training activities, they can turn their attention to providing information that helps players apply technique and better read the tactical cues of the game. Players must be developmentally ready to listen to the coach and the coach must appreciate what information is most relevant to any particular player at any particular time. In general, our soccer environment is characterized by an overload of coaching information and a dearth of natural learning through play. As a result, we have very few players who are comfortable in possession, and ever fewer who can be described as creative. Soccer needs coaches who think differently, who are less intrusive, and who understand that the game is full of mistakes and that’s OK!
Assessing The Training Session
When assessing the quality of their training sessions, coaches should challenge themselves on the following four questions¦
First, were the activities relevant? Simply did my practice activities look like soccer?
Second, did the activities have flow? Were there natural transitions between
attack and defense? Was I able to leave the players in control?
Third, were the players engaged in the activities? Were the games enjoyable? Did I give them ways to win? Did I tell them how long they were playing for?
Fourth, was I able to tweak the activities to find balance between challenge and success? Were the teams balanced? Was the ball out of bounds a lot? How many passes connected before turn-overs? Were the spaces OK for the number of players? Did the conditions (i.e., 2-touch) help or hurt the search for better soccer? Did my activities target the soccer problems I was trying to train?
The Impact of Practice Variables on Success and Challenge
The five variables outlined below constitute the bag of tricks available to coaches who endeavor to create realistic and challenging training activities for their players without over-coaching. Coaches who look to experiment with the mix of these variables will learn from their successes and failures and, in time, become better at their craft.
1. Number of Players
¢ The higher the number of players in a game or activity, the fewer
opportunities each player has to actively participate.
¢ The higher the number of players in a game or activity, the more difficult it
becomes to create space and maintain possession.
¢ With smaller numbers, the onus is on the players to apply the basic
principles of play.
¢ With larger numbers, the onus is on the players to demonstrate positional
understanding and how to play away from the ball.
¢ Smaller playing numbers increase anaerobic fitness demands.
¢ Larger playing numbers provide for more natural rest periods within any
game or activity.
¢ Neutral players encourage possession and attacking success.
¢ Neutral players pose additional problems for defenders.
2. Method of Scoring
¢ Providing a way to win improves motivation and purpose.
¢ Providing a means of transitioning from defense to attack and vice versa
improves motivation.
¢ Games played through 180 degrees (directional) are more challenging for
attackers.
¢ Games played through 360 degrees (non-directional) are more challenging
for defenders.
¢ Games with more than one goal to attack provide for more scoring and
creativity.
¢ Games with more than one goal to attack increase the challenge for
defenders.
¢ Games with goalkeepers or targets provide for better flow in transition.
¢ Games with goalkeepers are more realistic.
¢ The larger the goal, the more likely it is that players will shoot.
¢ The larger the goal, the more likely it is that players will shoot from
distance.
¢ The larger the goal, the earlier players will start to defend.
¢ The method of scoring influences the technical, tactical, physical and
psychological demands of any game.
Scoring Options for Small-Sided Games
Goals can be scored in a number of different ways, with the size, number and location of the goals impacting the technical, tactical, physical, and psychological demands of the game.
The following diagrams show examples of the most common scoring methods and many other configurations are possible. Coaches should strive to become familiar with the working dynamic between the size and shape of the playing area, the number of players on the field, the conditions (restrictions) imposed on the game, and the method of scoring. (click on the pictures for a larger view) 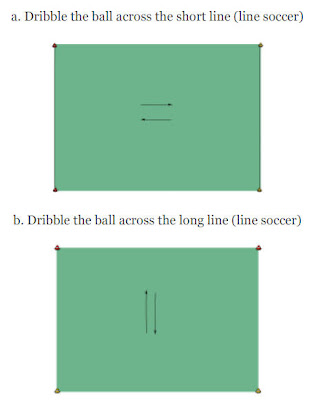 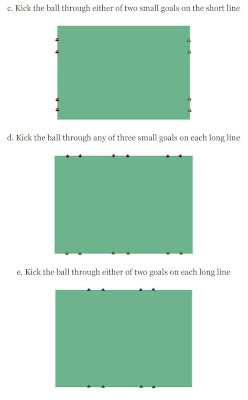 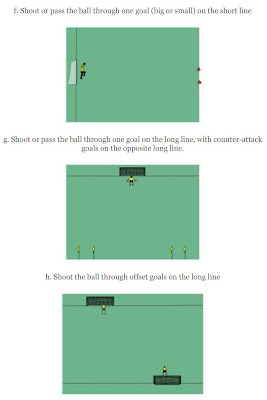 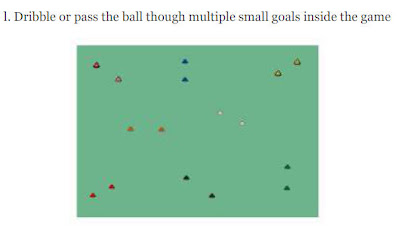 3. Space
¢ The smaller the space, the higher the demands on technique and spatial
awareness.
¢ Younger players need larger spaces.
¢ Better players should play in smaller spaces.
¢ The playing space should provide for adequate flow.
¢ The playing space should provide for adequate challenge.
¢ The playing space must be proportional to the number of players on the
field.
¢ The playing space can be square or rectangular, but most games should be
played in a rectangle.
¢ The configuration of the playing space will influence the technical, tactical,
physical and psychological demands of any game.
¢ Goals do not always have to be opposite each other.
4. Time
¢ The players should know how long they are playing for before they start.
¢ Playing time should be related to the fitness demands of the game or
activity.
¢ The fewer the players, the shorter the playing time.
¢ With no rest, players will go into oxygen debt in 60-90 seconds.
¢ Playing time should be related to a way to win (time or score).
5. Conditions and Playing Rules
¢ Conditions and playing rules must be realistic to the game of soccer.
¢ Positive conditions (points rewarding successful application of a concept)
are usually more motivating.
¢ Negative conditions (penalizing players for non-compliance) should be
used sparingly.
¢ Absolute conditions (players must perform X before going to goal)
usually produce unrealistic soccer games.
¢ Conditions should never become more important than scoring goals.
¢ Playing rules can and should be modified to provide maximum flow to
activities. In particular¦.
o Enforcing offside challenges attacking players to be more
sophisticated in creating chances.
o Enforcing offside gives defenders the option to stop tracking
runners or step up.
o Enforcing offside provides goalkeepers with space to assess starting
positions and cut down angles.
o Moving the offside line back from the half-way line favors attackers
and attacking concepts, such as stretching the field from front to
back.
o Not having an offside line hinders defenders and the development
of defensive concepts, such as squeezing the field from front to
back.