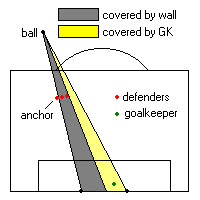 Setting a Wall
by Jeff Benjamin
Fig. 1: Setting a Wall
If the opponent is given a free kick within 10-20 yards of the penalty area (or an indirect kick inside the penalty area), the standard defense is to make a “wall” of two or more players the minimum 10 yards from the spot of the kick. This wall serves to block part of the goal from the shooter so that the goalkeeper only has to worry about guarding a small portion of the goal mouth. However, if the wall is not properly positioned, it my actually do more harm than good!
The wall must be set up quickly, following these basic guidelines:

One defender must identify themselves as the outside “anchor” of the wall. Make sure everyone knows who this is; they should raise their hand and make eye contact with the keeper. Some teams may wish to identify this player ahead of time, even in practice sessions.
The goalkeeper must choose how many players will be in the wall. The more extreme the angle, the fewer players. Two players is sufficient for a ball close to the end line; the keeper might want as many as five or even six in the wall for a straight on shot. The exact number will depend on the situation and how much goal the keeper feels confident covering.
The goalkeeper sets the “anchor” just outside a line between the soccer ball and the near post (Fig. 1). This covers the near part of the goal with a little overlap to prevent balls from bending around the wall. The keeper will usually dash over to the near post to sight from the post to the ball to make sure things are positioned properly. While doing this the keeper is way out of position, so speed is essential! Some teams prefer to free the keeper of this duty by using a forward, who lines up the wall by sighting from behind the ball back towards the goalpost.
The other players line up against the “anchor” player to the inside of the goal. Players need to be right against one another so no ball can slip through the wall.
Once the wall is set, the goalkeeper moves to cover the space between the inside of the wall and the far post.
On rare occasions, the attacking team will win an indirect free kick in the penalty area that is less than 10 yards from the goal. What to do then? Defenders are allowed to be closer than ten yards to the ball, provided they are on the goal line and between the goalposts. The wall, then, will actually be set in the goal. The tallest players available should be on the goal line, to prevent a chip shot under the crossbar. Since this can only happen on an indirect kick, one defender should be designated as the “bullet man” to rush the ball as soon as it is touched and disrupt a subsequent shot.

Most teams almost never practice this situation; I have seen it occur only a handful of times in thousands of games I’ve seen. But a good goalkeeper is prepared for any situation, and if they’re aware of this provision of the laws, they can organize things quickly if it should ever occur

2 responses to “GK’s Setting a Wall”