Is a Coaching License Really a License? 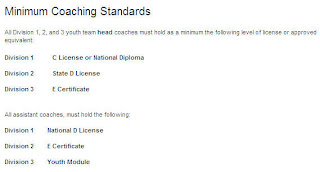 I have already mentioned in a previous post that my buddies bust on me for having more coaching licenses than almost everybody in the US. I like attending the courses for the knowledge you gain from them. Every coach can pick up at least one thing (usually more than one) from taking a license. I started when I just got out of college with the E license and have taken courses from both the USSF and the NSCAA. I took my E license in Tennessee because that is where I went to college and the fact that it was free. Tennessee is the only state that offers the state level licenses (E and D) for free. They offer six E licenses and six D licenses at no charge every year. The reason that there is no charge is to promote the education of coaches in Tennessee. This is not the only reason that this state is unique. They are also the only state that has minimum license requirements for their coaches. The image on the right is from their website and lists those standards (Click on it for a larger view.) Just recently the USSF Academy is giving their clubs within two years to make sure that their head coaches of the U16 and U18 teams have an A license. I am a big fan of these requirements for a couple of reasons. One is the fact that it will force coaches to get out of their comfort zone and get some coaching education that will make them better. Another is that it will prevent every Tom, Dick, and Harry from starting a soccer club or just simple calling themselves a soccer coach. We have a licensing system in this country and I understand that, in the past, there was probably not a big enough pool of coaches to enforce that standard, but the times have changed. Don’t get me wrong, I am not saying that having a license automatically makes you a good coach. I have seen plenty of coaches with them that are not good. It does mean that you took the time to hone your craft and attempt to get better, which is more than I can say for all of those coaches out there that haven’t made that attempt. Unlike other American sports, you cannot just put a whistle around your neck and call yourself a coach…or can you? If you do not have enough of a standard, you can.

2 responses to “Is a Coaching License Really a License?”