With this in mind, coaches must avoid having their team possess the ball for the sole purpose of possessing the ball. The best way a coach can avoid possession for the sake of possession is to put players in activities that have a direction to attack and a direction to defend. Reasons for directional possession include:
¢ More like the game
¢ Realistic Shape
¢ Realistic Defending
¢ Players must make decisions in regard to the variety of possession oriented passes
¢ Presents more realistic opportunities to effect players through coaching moments

This article was written by John Dingle and below I will include one of my favorite directional possession games. I saw a men’s division 1 college team doing this in training. It is set up with two teams. The grid is a square and needs to be adjusted depending on the number of players you have. The black team puts one target player outside the grid on one side and another outside the grid on the side facing the other target. 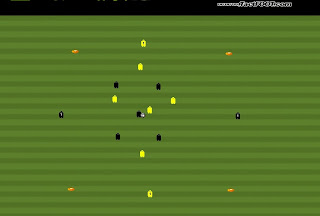 The yellow team puts a target on the outside of each of the two remaining sides of the square. The teams score by passing the ball to one of the targets, getting it back, then playing to the other target, and getting it back. Once they complete that sequence, they get one point. The reason that I like this activity is because it forces players to be mobile and constantly find there shape in transition due to the teams attacking in different directions perpendicularly(as opposed to laterally).